I received e-mail from a customer who takes good care of Nissan TERRANO for the first time in about two years.

In July 2017, thank you for replacing three auxiliary belts and LLC.
Today, when I found an oil stain about 10 cm in diameter on the ground at the time of issue, I found an oil leak from the suction hose of the power steering.
I'm ashamed to say that I've been unchanged for about 15 years, so it seems to have been a limit.
There is no noise or vibration when operating the steering wheel yet.
Therefore, just because it is a good opportunity, i ask for inspection repair power steering system, LLC replacement, radiator fan replacement that has been pointed out crack, meter lamp replacement.

Inspection maintenance and continuous inspection acceptance are basically the car that the user is himself.There was a request for partial maintenance a la carte last time, but it seems that the trouble came out according to the age of the car.

First of all, I inspect the point where I heard that the leak of the power steering fluid, but there is a stain around the hose, but it is not a leak enough to become a stain about 10 cm in diameter.The amount of fluid in the reserve tank also had no liquid level drop, which is a problem.

Rather, there is almost no remaining amount of LLC sub-tank, and I am more concerned about this.

At the time of the visit, I was warm-up and felt the LLC odor in the engine room, but there was no drip.

When the engine started from the cold machine state, a significant leak of LLC was confirmed from the inspection hole of the water pump. 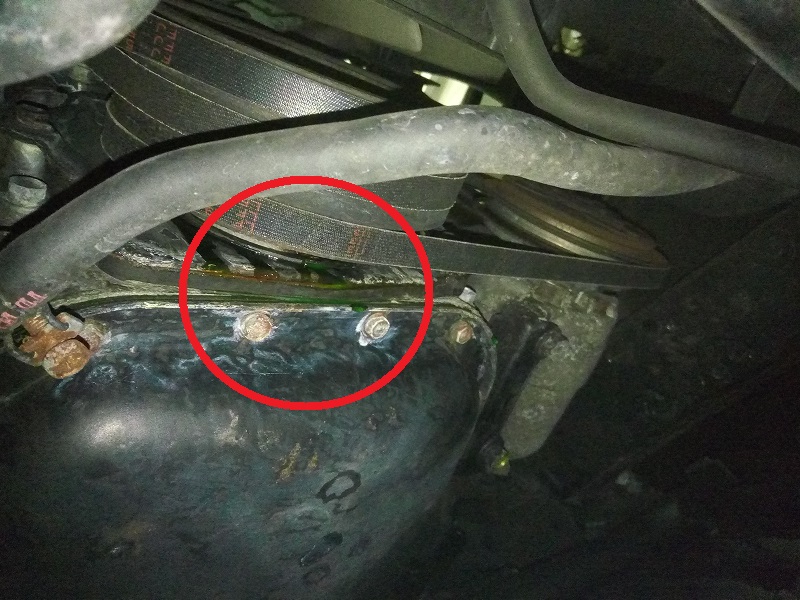 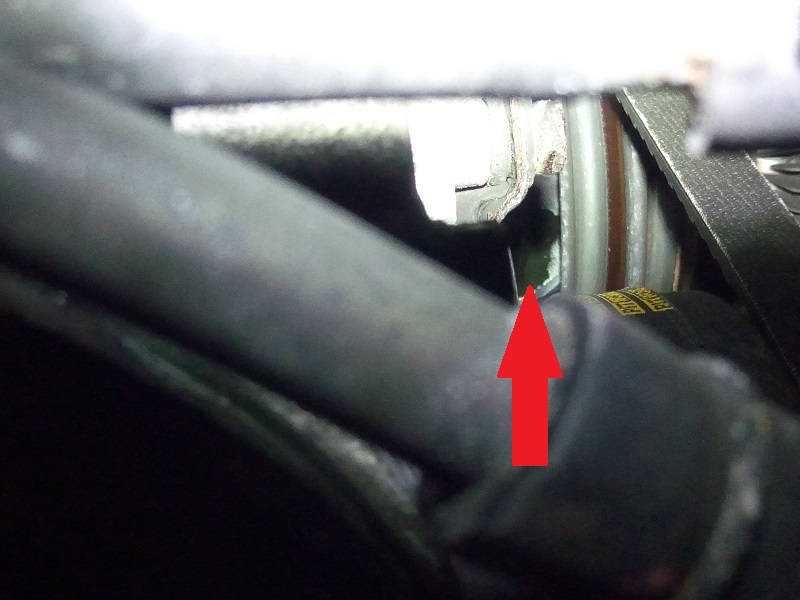 Because the leak stops when the engine warms up, it seems likely that it was LLC that the owner was confirmed under the vehicle.

Since there is enough work space without removing the radiator, the replacement itself is not made. 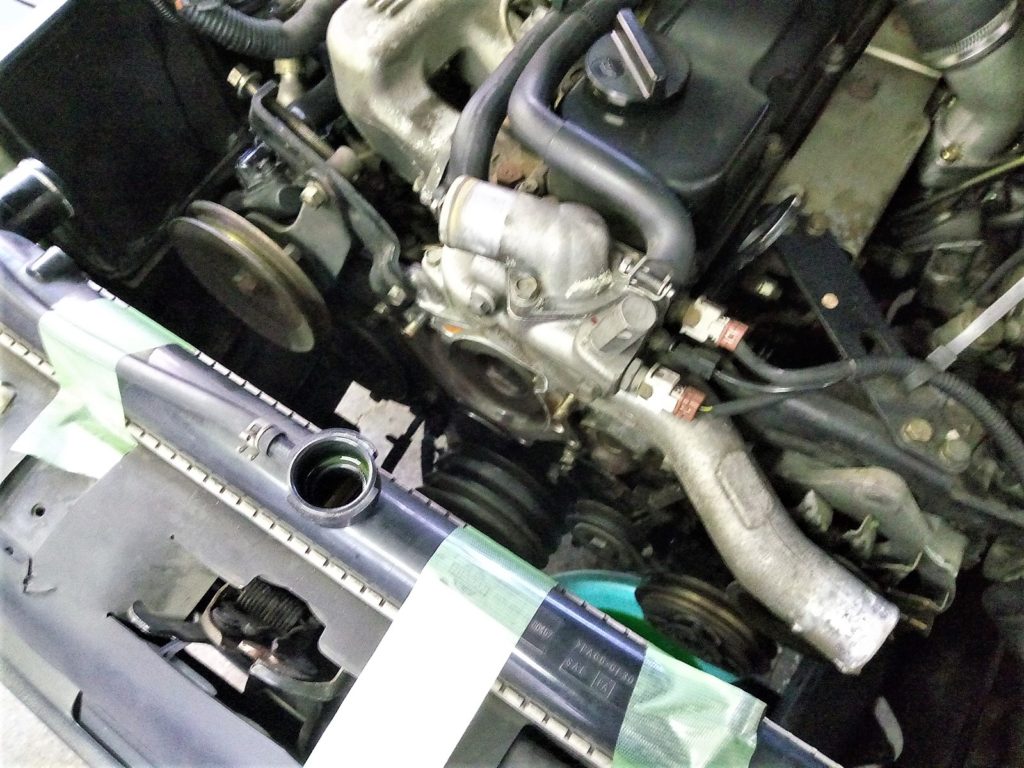 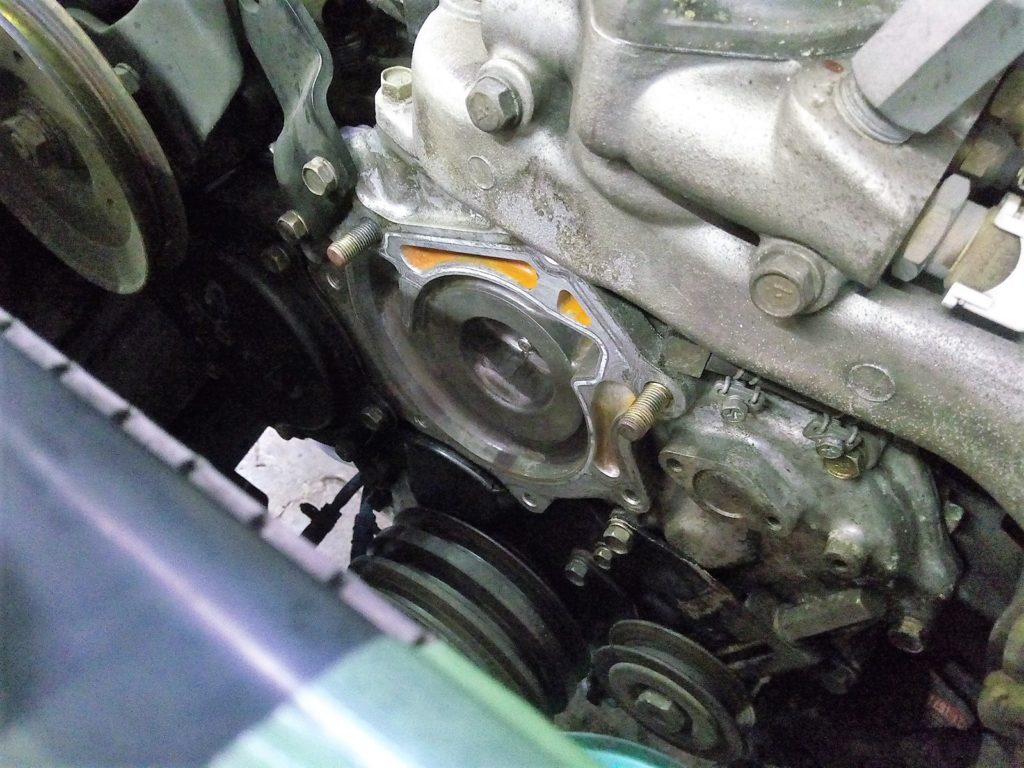 Both the radiator hose and the cooling fan are new, and it turns out that there is an LLC leak from above the water pump when assembled and confirmed. 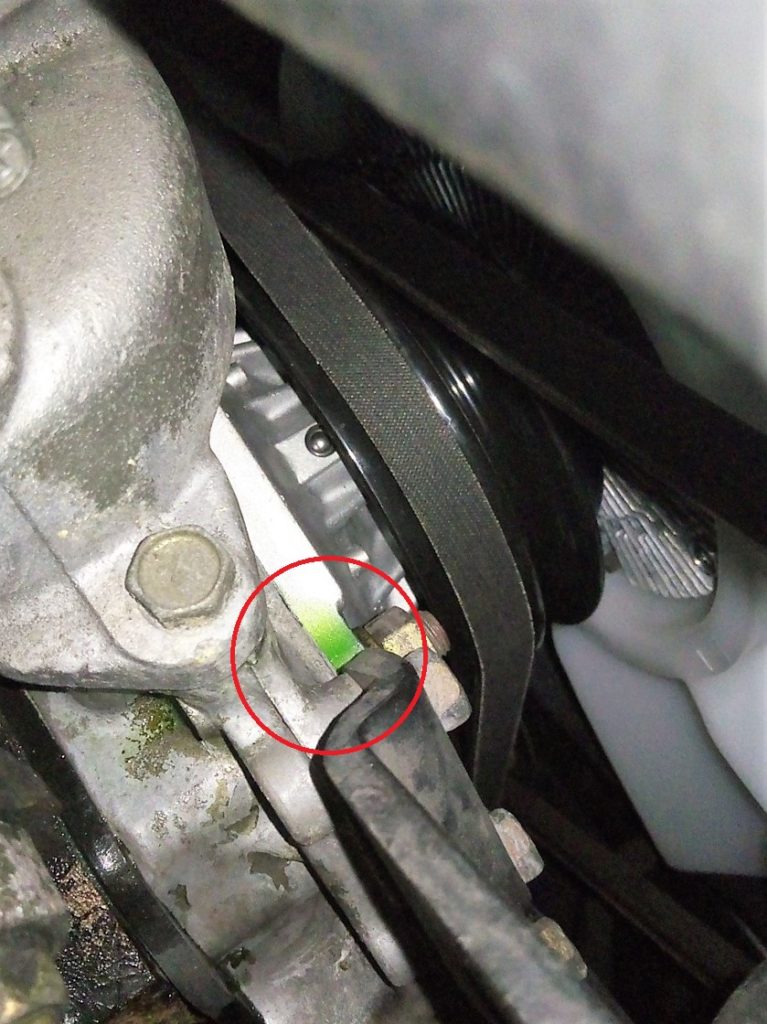 It seems to be a junction with the thermostat case directly above the water pump housing. 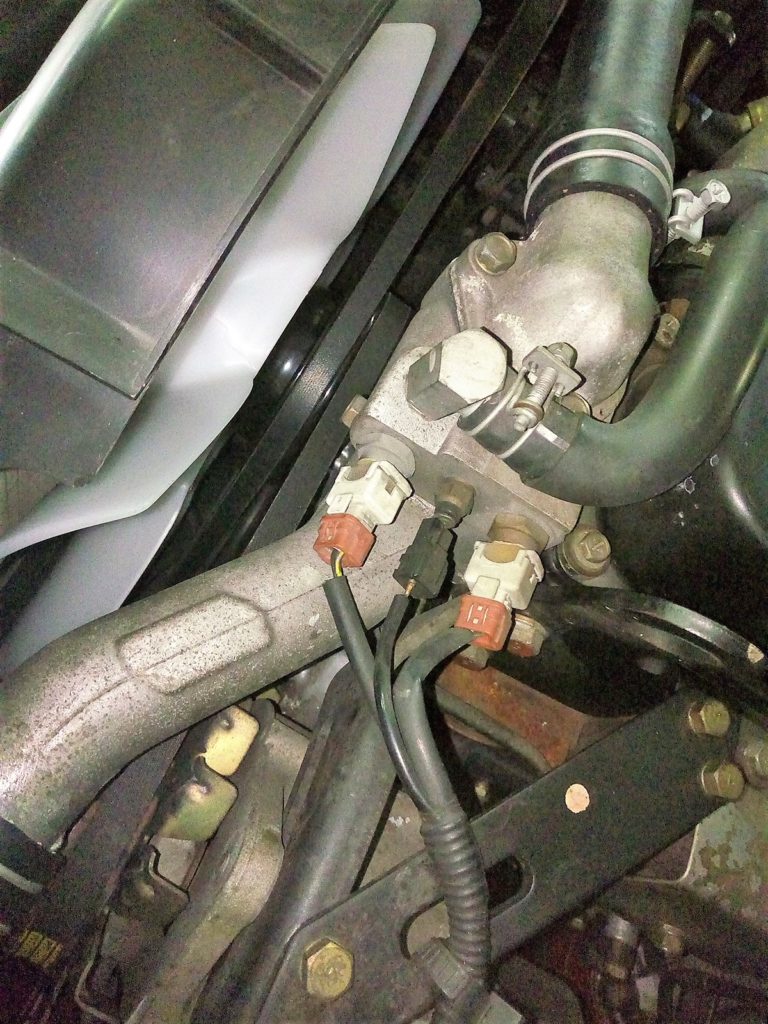 It is because the rubber packing of this place was cured. 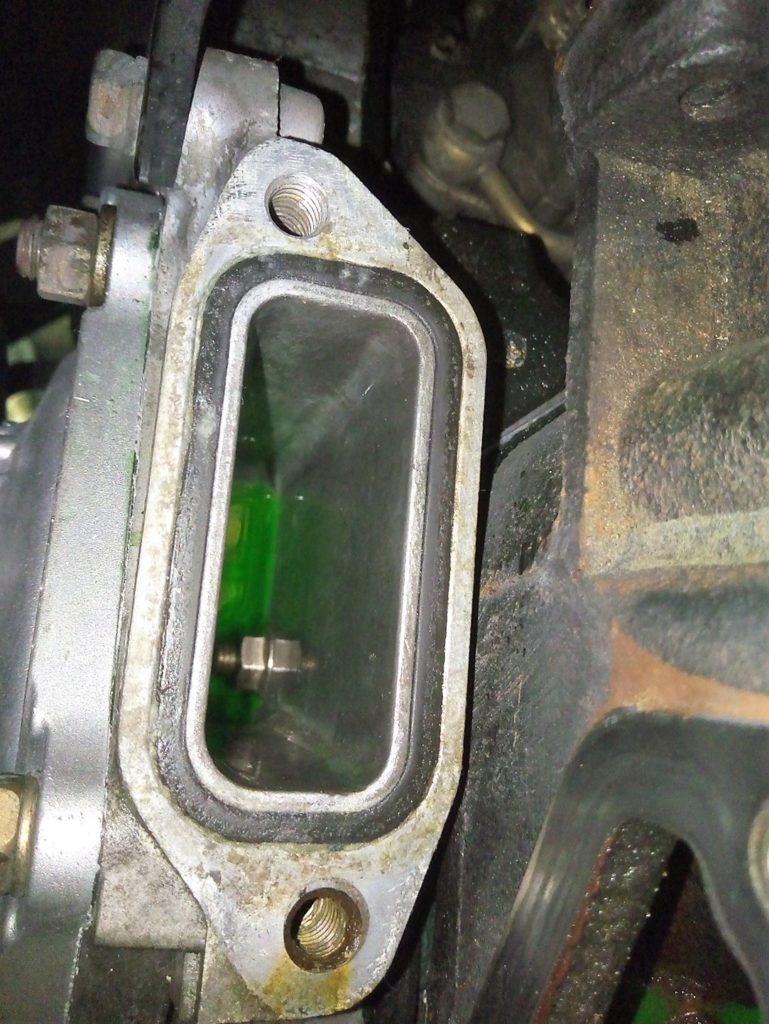 LLC management is never bad, but hardening of rubber due to engine heat is inevitable.The same is provided in the joint between the housing and the cylinder block that supports the water pump and the injection pump, so we asked the owner to check the amount of LLC on a daily basis after delivery.

By the way, it was said that it was maintained by oneself, but when I checked at the time of lift-up, I was worried about the state of the front hub that required grease-up and pre-load adjustment on a regular basis, and there was a rattling of the hub that can not be ignored. 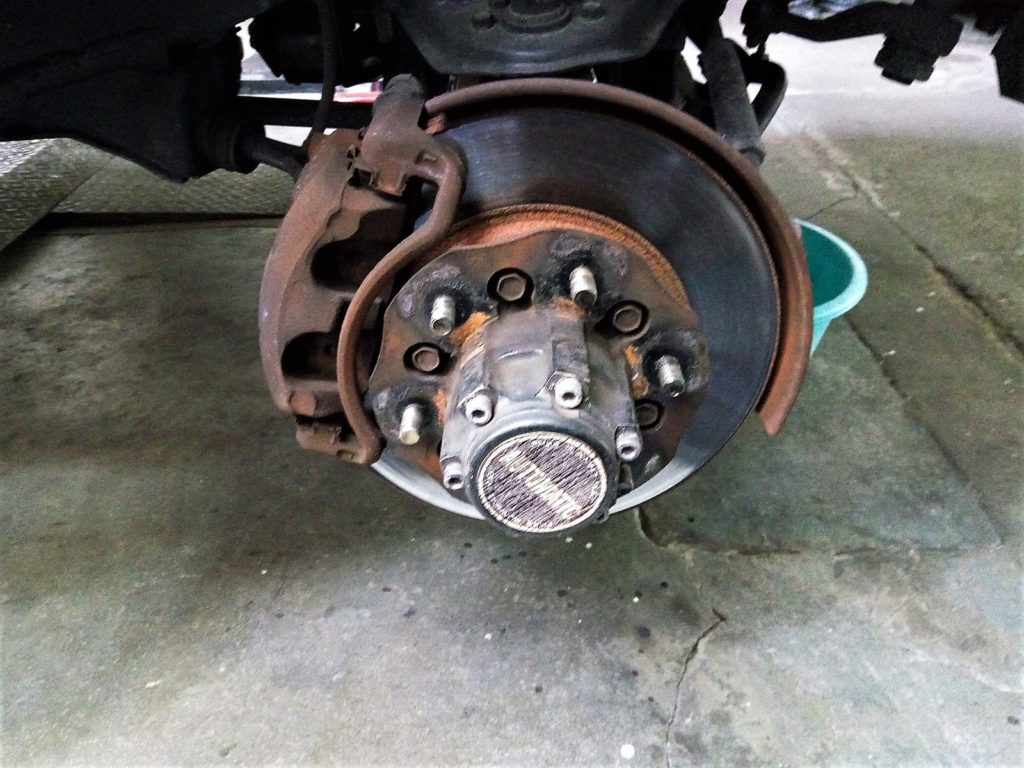 According to the details of the work, the position of the hub nut has not been adjusted further by marking before disassembly.It is said that it was referred to the post of the general public of the Web, but I will try to disassemble once and confirm it because the point is different.

The bearing, which has not been grease-up for many years, is a grease packer that injects new grease. 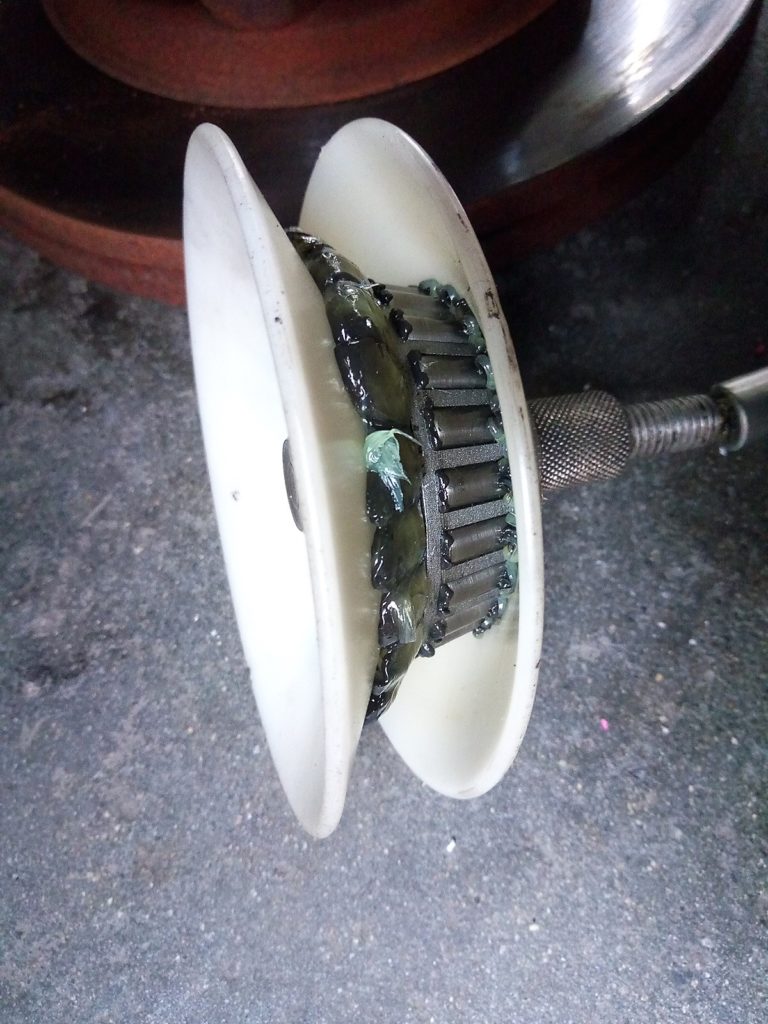 The tightening of the hub nut is very dangerous when the general public is helpful and in the wrong state, so I will spare it. 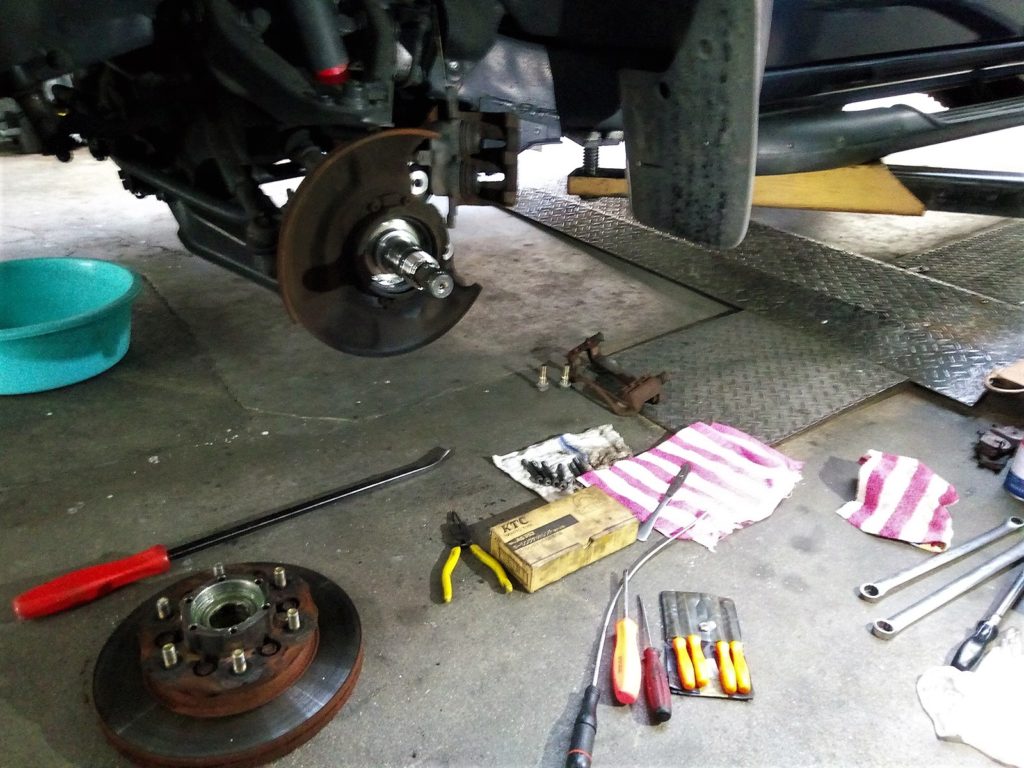 The disc pad of the front which had little remaining amount is replaced, but rust is turning when checking in the dust boots of the caliper piston, and it is not in a state that can be pushed in as it is.

This is the opportunity to overhaul the caliper. 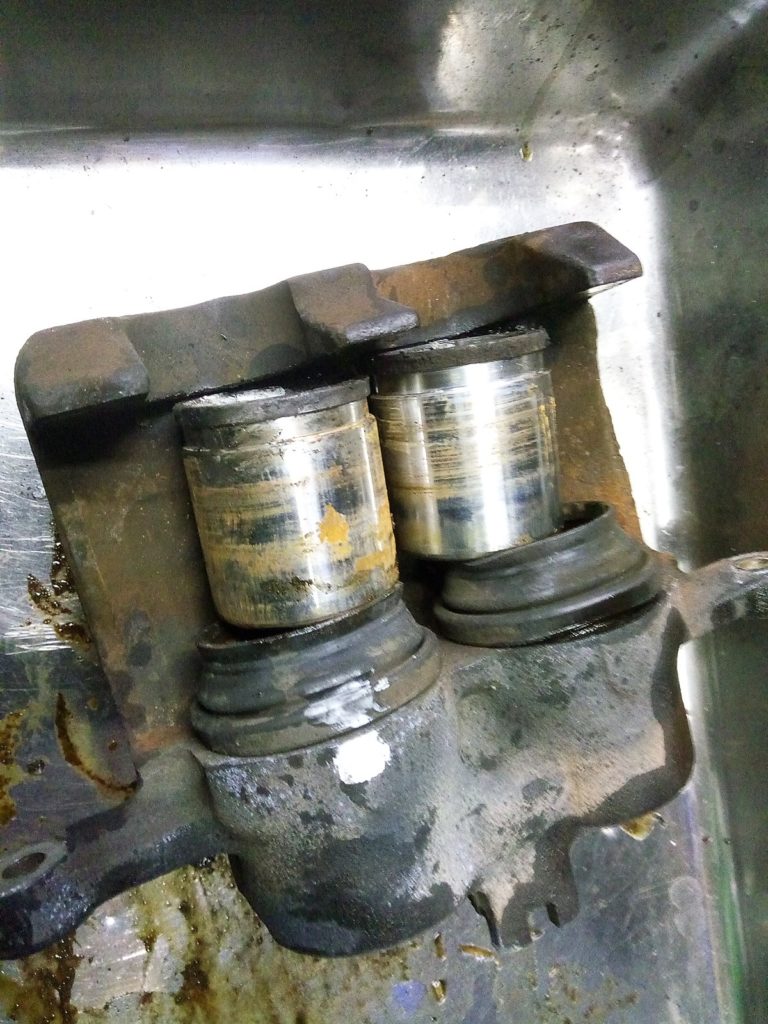 When cleaning the rusted piston, corrosion marks are seen in the abata shape, and reuse is not possible. 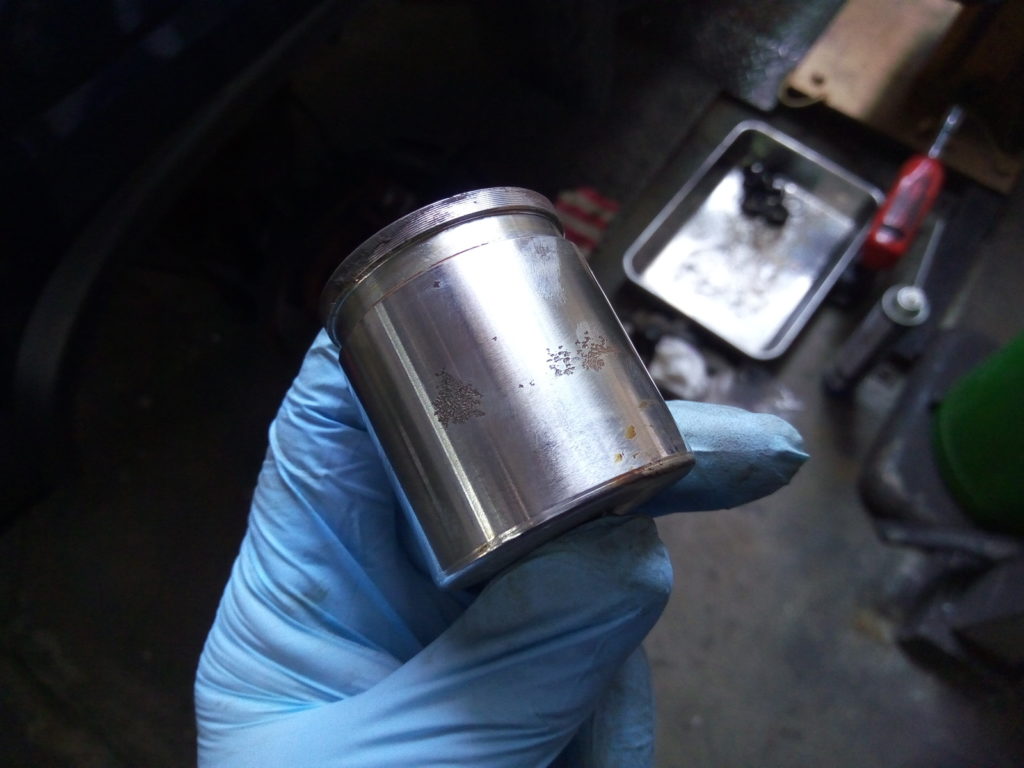 I felt that the replacement of the brake fluid was not frequent and way enough.

In the Road Transport Vehicle Act, there is a statement that the user himself will inspect and maintain the inspection and undergo a continuous inspection, and it is one of the few owners who have been carried out with sincerity.The love and the way of dealing can be seen from the fact that the state of the car is kept very beautiful.

There are a lot of upsets that cannot be found just by passing through the inspection site of the Transportation Bureau (although this is a problem in itself).

Since the age of the car has become suitable, we recommend that you receive professional inspection and maintenance on a regular basis.

We would appreciate your continued cooperation.